If someone were to describe a situation where a hundred dogs were found living in all-wire cages that offered little or no shelter from extremes in weather, where the dogs themselves were suffering from overgrown nails, ear and eye infections, severely matted hair, and untreated wounds, I would expect us all to have a similar reaction: surely, this was a situation of neglect that amounted to animal cruelty; such cruelty would be a violation of any state cruelty statute. Perhaps some of us would question whether this was a case of animal hoarding, which, though also constituting neglect and cruelty, adds a factor of human mental illness to consider when deciding what is justice.

However, many times a scenario such as the one I’ve described is the reality known as a “puppy mill,” a large breeding facility where the market for purebred companion animals has turned dogs into crops, and where breeders that look into those lovable puppy eyes see only dollar signs. And the only thing worse than being a puppy at a mill is being one of the dogs who are kept solely for breeding purposes. While puppies are sold into (we hope) loving homes, mamas will spend their whole lives in cages, kept pregnant for as long as their bodies will keep producing. When they are spent, they will be sick, exhausted, and euthanized.

So why aren’t these breeders prosecuted for cruelty? Here’s a look at the federal and state laws in place, where they fall short, as well as some recent legislative efforts to come to the aid of those suffering.

The Animal Welfare Act, under the supervision of the USDA’s Animal and Plant Health Inspection Service (APHIS), is the major federal law that is supposed to protect animals used for commercial purposes. The minimum threshold standards address basic needs of food, water, shelter, and veterinary care. Unfortunately, animals sold by retail pet store owners are explicitly exempt. The original thinking behind the exemption was that, because people would be going into pet stores, they would be able to see the conditions; therefore, additional regulation wouldn’t be necessary – the retailers would self-regulate in their own interest. However, with the rise of internet sales, the public doesn’t have the same access it once did. A wonderful-looking web site does not mean things are looking so wonderful behind the fences. And getting onto the premises to inspect these places is nearly impossible.

The Puppy Uniform Protection and Safety Act
This piece of legislation currently is under review by the United States House (H.R. 835) and Senate (S. 707). The law would help to close the loophole in the AWA by regulating breeders that sell more than 50 dogs per year; it also includes the requirement for daily exercise.

Particularly because of the nature of the puppy mill business — interstate commerce — a uniform federal standard is essential in the protection of these dogs across state lines.

State Laws
Many states have taken different approaches towards offering dogs in puppy mills greater protection. State laws may impose regulations on individuals in possession of a certain number of dogs (i.e., 30 dogs in Virginia); in other states, such as Pennsylvania and Arizona, breeders are required to obtain kennel licenses. Other states may place a cap on the total number of dogs one can have on premises (Louisiana prohibits more than 75 dogs). Still other laws require that dogs be given time outside of their cages for exercise.

However, as with other systems that rely on permits and licensing, there are frequently issues of monitoring and enforcement; even where the law allows for inspections, local law enforcement is unlikely to make this a priority when they are already feeling stretched thin by other community demands.

During the 2010 elections, there was cause for great excitement when Missouri citizens voted in favor of  “The Puppy Mill Cruelty Prevention Act” (Proposition B), which placed restrictions (such as a 50 dog cap) on dog breeders. Missouri is one of the Midwestern states where puppy mills are big business. Not surprising, then, that after the measure passed, there was pressure from rural communities where these puppy mills are located to overturn the vote; the industry claimed the Act as it was written would be too costly… businesses would close. Consequently, in 2011, the law was repealed by Missouri’s Governor. In its place, new legislation was signed into effect that does not include many of the key provisions — and therefore protections — of the original Act.

Consumer Demand
Stronger laws, as those described above, are essential to regulate breeding establishments and to bring an end to puppy mills. Furthermore “puppy lemon laws” help protect the uninformed consumer who unknowingly purchases a dog with health or congenital defects — not uncommon in dogs born within the puppy mill system. In addition, dogs coming from these miserable conditions can be extremely difficult to socialize.

Getting beyond the availability of compensation for an unhealthy puppy remains the fact that, simply put, the public needs to stop purchasing these puppies. The puppy mill industry is a for-profit business. If the demand for these puppies goes away, the businesses will end. Not only is it imperative to cease buying these puppies, but it also is essential to educate others about the true conditions of these places so that they, too, will look elsewhere for their next family dog. 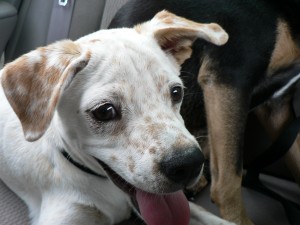 our Galileo as a puppy

Please adopt — don’t shop!
Local animal control centers euthanize upwards of 70% of the stray animals they take in. Approximately 4 million shelter animals are euthanized each year, 60 percent of them dogs. I encourage everyone who is thinking about adding a canine member to the family to please adopt – don’t shop! Besides the nearest animal control, local humane societies and foster/rescue organizations are seeking loving furever homes for animals in need. My Pushkin came from Bideawee in NYC; Galileo was a puppy rescued by the Tucson organization FAIR.

For those who are drawn to a particular breed, Petfinder.com will allow you to search for that darling Daschund or Boston Terrier. Also, many local rescue groups focus on a particular breed. Here in Tucson, for example, we have the Arizona Greyhound Rescue and the Southern Arizona Beagle Rescue. In nearby Phoenix, there is Southwest German Shepherd Rescue. These are just a few of the countless organizations that will help you find the perfect match… without going to a breeder.

Fur-Free, Faux, and "Faux"
Highlights from the "Farmed Animals: Law & Policy" class
In Portland for the Animal Law Conference