Just Back from The Genesis Awards!

Home » Organizations » Just Back from The Genesis Awards! 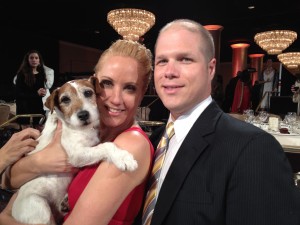 with Uggie, from The Artist

This past weekend, I was in Los Angeles to attend The 26th Genesis Awards held at The Beverly Hilton. Each year, The Humane Society of the United States hosts a star-studded event that recognizes the contributions by major news and entertainment media in raising public awareness about animal issues. Saturday night’s program was hosted by Carrie Ann Inaba of “Dancing with the Stars.” 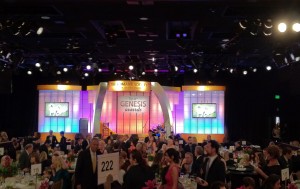 The evening began with cocktails before sitting down to a 3-course vegan meal, followed by the awards show. Celebrity presenters included Colbie Callat, Bill Maher, Rose McGowan, Cloris Leachman, Jason Ritter, and Moby. In the midst of all the mingling, I enjoyed a conversation with the Today show’s Jill Rappaport, who won for her series of reports on rescuers of homeless animals. However, the highlight of the evening for me was getting lots of face licks from presenter Uggie, star of the Academy Award winning film The Artist.

All of the nominees deserve a standing ovation for their inspiring work. Here’s a list of some of the night’s winners, just to give you a glimpse:

Ian Somerhalder of “The Vampire Diaries” received the Wyler Award, which is awarded each year to a celebrity or public figure who has raised awareness of animal issues via the media. The Ian Somerhalder Foundation “aims to empower, educate, and collaborate with people and projects to positively impact the planet and its creatures. ” Ian actively tweets and blogs about all kinds of animal issues, and even went before Congress to support the Multinational Species Conservation Funds Reauthorization Act of 2011. Awesome!

The Genesis Awards will air on Animal Planet, May 5th at 4:00pm (EST), with an encore broadcast on May 6th… watch for me in the audience! 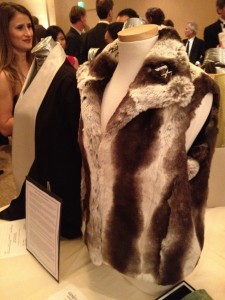 Silent Auction
In addition to the dinner and awards, the night includes a silent auction and a rockin’ after party. Among the items to bid on were some of my favorite cruelty-free products, such as a coat by Vaute Coat and a faux-fur vest by Impostor. I walked away with a gift bag by one of my NYC faves — Candle 79: a gift certificate to the restaurant, plus a few tee-shirts and the new Candle 79 cookbook.

A peek inside the program…
Extra special for me about this event: as purchasers of “Gazelle” tickets, we were listed in the program among the supporters of the evening’s event. And so, this became the first official social event for Riverside 105 Media, the newest joint venture by my husband Seth and me. Riverside 105 serves as an umbrella for various projects we have in the works, including Cruelty-Free Faves, my Animals & the Law blog, Letters To Pushkin — the web site and the new e-book — and Seth’s film company, Plant-Based Productions.