Animals in Entertainment: The Circus

Home » Animals & the Law » Animals in Entertainment: The Circus

“Circus animals are being forced to perform unnatural tricks, are housed in cramped cages, subjected to fear, hunger, and pain, not to mention the undignified way of life they have to live, with no respite… Though not homo sapiens, they are also beings entitled to dignified existence and humane treatment sans cruelty and torture.” — K. Madhavan v. The District Collector, 2008, Madras High Court – India 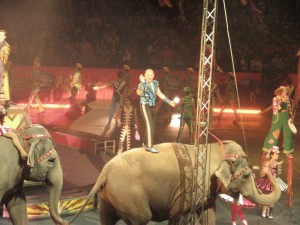 The use of animals in circuses presents a few different issues. First, one looks at the treatment of the animals and the conditions they are subjected to as they perform: an environment of noisy crowds and flashing lights is a far cry from an animal’s natural habitat. Second, there is the treatment of the animals that results in their performance bag of tricks — namely, the training methods. Third, there are the issues of housing and transport, as a circus makes its way from city to city.

Federal Law
There are two major federal laws that apply to the use of animals in circuses:

State Animal Cruelty Statutes and Local Ordinances
Individual states have their own animal cruelty statutes. Generally, these laws define cruelty as intentional acts of beating, tormenting, overworking, starving, or otherwise abusing an animal. However, in twenty-three states, circus animals are explicitly exempt from the protection of these statutes. And even in those states where there is no exemption, because traveling circuses are quickly moving from one jurisdiction to another, monitoring and reporting abuses — and therefore enforcing any penalties –is difficult to achieve on a state level.

Beyond state cruelty statutes, another approach is the use of local ordinances. For example, in recent news, the city of Rio Rancho, New Mexico refused to issue Ringling Bros. a permit to perform at its Santa Ana Star Center on the basis of its updated ordinance: last year, the city added a provision to its animal ordinance barring animal shows that had entered into any settlements with the USDA within the previous five years or had been cited for violations of the AWA within the past three years.

Plaintiffs in this case were four animal welfare organizations and a former elephant handler for Ringling Bros., Tom Rider. This case was brought forth as a citizen suit, under the Endangered Species Act. The claim alleged that the use of bullhooks and leg tethers of the circus’ Asian elephants (classified as “endangered” under the ESA) constituted illegal “takings” under the ESA.

Bullhooks are three-foot wooden clubs with a sharp metal hook at the end; elephant handlers use the bullhook to repeatedly beat the elephants as a way of training them. As for the tethering, the plaintiffs pointed to the social, psychological and physical needs of elephants. Chained as they are, the elephants are unable to engage in their normal behaviors, which include walking many miles each day and interacting with other elephants; also, they suffer from foot problems and arthritis because they are kept on hard surfaces.

Feld’s arguments were that (1) the plaintiffs did not have standing, (2) the “takings” provision of the ESA did not apply to captive endangered species and,  (3) that, even if the ESA did apply, the use of bullhooks and leg chains are generally accepted animal-husbandry practices and therefore exempt from the ESA’s “harass” provision.

The trial court found in favor of Feld. Unfortunately, more than a decade after the original filing, this case was unanimously dismissed by the Circuit Court panel on the basis that Rider had been paid by the organizations who were also party to the suit — essentially discrediting him as a witness. No. 03-2006 (D.D.C.)

The plaintiff Hagan was a lion handler, part of whose job was feeding and watering the lions, cleaning their cages, and caring for them during transport as well as at each performance location — all tasks that should be carried out in accordance with the Animal Welfare Act. The incident at issue began on July 12th, 2004, when the Ringling Bros. train left Phoenix, Arizona for Fresno, California.

The second day of travel took the train through the desert and temperatures were “upwards of one hundred degrees.” Hagan requested that the train be stopped so he could water down the lions; his request was denied, and he was given the reason that the train was behind schedule. Between 8:30am and 2:45pm that day, the lions had no drinking water and were not watered down. When the train finally stopped, Hagan found a two year-old lion lying in a fetal position with his tongue hanging out and eyes rolled back. He was barely breathing. And, despite Hagan’s attempts to revive him, the young lion died.

Subsequently, Ringling’s Operations Manager told Hagan to move the lion’s body to the meat car and not to say anything to anyone about what had happened. Once the train arrived in Fresno, Hagan was told to move the lion corpse from the train to a rental truck and to pressure wash the train car before the USDA arrived for inspection. Once the inspectors arrived, Hagan was taken to another location where he was questioned by Feld’s legal counsel and then, again, told not to discuss the incident with anyone. One week later, while still in California, Hagan was terminated and left with no way to get back home. (Reason given for termination: Hagan caused a power outage.)

In this case, the focus was on the injury to Hagan — wrongful discharge — rather than on the mistreatment of the lions. Hagan claimed that his termination was the result of his complaining to management about the AWA violations regarding the lions in transport. 365 F. Supp. 2d 700

International Bans on Animal Circuses
Because of the widespread abuses, the inherent problems with entrusting an industry to regulate itself, and the cruelty in having to contain and transport animals endlessly from one location to the next as any traveling circus necessitates, the response from the global community has been to move for complete bans rather than further regulation of the circus industry. With its Prevention of Cruelty to Animals Act, India limited circuses by prohibiting the training or exhibition of bears, monkeys, tigers, panthers, and lions. Other countries that have banned the use of all wild animals in circuses include Austria, Singapore, and Peru. In 2009, Bolivia became the first country to ban the use of all animals in circuses (wild and domestic), and Brazil is now considering similar legislation.

On a Personal Note
I have a vivid memory from when I was a young child — five or six years old — of going to Madison Square Garden to see the circus. Naturally, there was all the excitement of going with my friends to such a huge spectacle. At that age, the arena seemed as big as a universe. All the kids had tiny plastic flip-top flashlights on cords that we could twirl around to create circles of light in the vast darkness. When the spotlights started dancing around the arena, pink clouds of cotton candy were everywhere. Kids and adults were all cheering with anticipation. Let the show begin.

My mother remembers that day well. She remembers how my face immediately changed when the bears came into the ring. I was distraught: “Why are they wearing muzzles?” I recall my mother explaining to me that the muzzles were for our safety and to protect the bears from each other. I was not convinced. These bears, who were dancing on their hind legs for us, turning around in circles for us? These bears… seemed sad. I wanted to go home.

As more details about the lives of circus animals become general public knowledge, it is my hope that the United States soon will be among the countries implementing a ban on animal circuses and, in doing so, eliminating the suffering of countless animals.