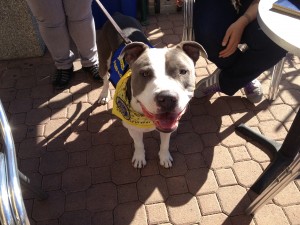 Over the years, different breeds — Dobermans, German Shepherds, Rottweilers, Mastiffs, Dalmatians, Chow Chows, and “pit bulls” (American Pit Bull Terriers, American Staffordshire Terriers, Staffordshire Bull Terriers) — have been victims of bad press and the resulting fear it generates among a misguided public. “Breed specific” legislation (BSL) refers to any laws that regulate or ban certain breeds, with authorities justifying these laws as necessary for public safety, as a means of reducing the number of dog-biting incidences.

State Laws: Breed Specific & Victims in Dogfighting Cases
Currently, thirteen states have “dangerous dog” laws that discriminate against particular breeds, most notably pit bull type dogs that are seized in dogfighting cases: Colorado, Delaware, Louisiana, Massachusetts, Michigan, Minnesota, New Jersey, North Carolina, South Carolina, Oklahoma, Rhode Island, South Dakota, and Wisconsin. In these states, dogs confiscated in dogfighting cases immediately are labeled as dangerous and therefore euthanized. When I was volunteering at Best Friends Animal Sanctuary in September, I spent time with one of the former Michael Vick dogs, a well-mannered and affectionate little lady named Layla. She is living proof that not all victims of dogfighting are beyond rehabilitation. (For the dogs of the Vick case, the Court must approve each dog as “adoptable” before (s)he is adopted out.)

Local Laws: Breed Bans & Confiscation
Cities and municipalities sometimes discriminate through the establishment of breed bans that prohibit ownership of certain breeds. Homeowner associations and landlords also often single out specific breeds as unacceptable. And, before former President George W. Bush left office, the Pentagon issued a memorandum prohibiting pit bulls, German Shepherds, Dobermans, and Rottweilers in military housing. Bans typically give local authorities and law enforcement the power to seize any dogs of the targeted breeds, even if they are living peacefully in a private home, even if the dogs have no history of aggression.

In response to the confiscation of one’s dog, an owner has a right under 42 U.S.C. sec. 1983 to claim that he has been deprived of the constitutional right to due process. In litigation, the state will bear the burden of proof to show that the dog is, in fact, a member of the targeted breed and that (s)he is “dangerous.”

Misidentification of dogs often leads to the confiscation and euthanization of dogs who not only are harmless, but also are not even a member of the targeted breed. Before reading further, I invite you to take the few minutes to test your own ability to accurately identify a dog’s breed by identifying the one American Pit Bull Terrier among the array of dogs pictured on Find the Pit Bull (Pit Bull Rescue Central web site). Current statistics suggest Animal Control usually identifies a dog’s breed correctly only 25% of the time. Meanwhile, breed bans that can lead to the euthanization of dogs often require that a dog be at least 51% of the targeted breed. To address this problem, the use of a dog’s DNA is gaining acceptance in the courtrooms.

w/Layla, one of the rehabilitated Michael Vick dogs

Positive Changes: Anti-Discriminatory Laws & Policies
While BSL continues to threaten the lives of countless dogs, there also have been many affirmative steps taken in defense of targeted breeds.

Positive Changes: A Holistic Approach
In addition to repealing discriminatory laws and creating breed-neutral laws and preemptive laws, we need to take additional measures to rectify the negative stereotype of these breeds and promote responsible ownership. Some recommendations:

As illustrated, it will take a combination of legislation, public outreach, and more specific training for law enforcement to effectively address the issues surrounding BSL. Through positive changes in the law — and, we hope, subsequent decisions in the courtroom based on those laws — we can help correct the negative stereotype of pit bulls and other “bully” breeds targeted by BSL initiatives that, in fact, have had little or no effect on the number of dog-biting incidences. Success in reducing such incidences is much more likely by taking a multi-pronged approach that encourages cooperation between community members and law enforcement. In doing so, we can better protect the interests of both the animals and their human counterparts.

Sources of information for this article: Presentation by Ledy VanKavage, Senior Legislative Attorney for Best Friends Animal Society, given at the Animal Law Conference at Lewis & Clark Law School on October 21, 2012; and Guilty ‘Til Proven Innocent, a documentary by Jeff Theman and Bryan Porter.